Published by Chance In orbYorb No Comments

Two weeks since the last patch! And here’s another one!

If you didn’t have a Vive, now is your chance. (If you have an Oculus that is).
(The game requires Oculus Touch controls, so if you only have the Headset, then apologies!)

We had a few challenges implementing Oculus in orbYorb. Primarily that Oculus doesn’t fully support 360 degree movement like the Vive does. (With the touch controls, it has experimental support of 360 movement, but we found during testing that it’s definitely still experimental). To combat this, we took the common approach that you might find in other VR games by offering a method of “rotating” in-world, rather than having to physically turn.

We tried some tricks like “drag-to-rotate”, which feels like you’re dragging the world around you. It works well enough, but the motion sickness really starts to get to you after a while.

For now we’ve got specific rotation methods for both the Oculus and the Vive. In the future we’ll add an option to change the rotation method so that you can personally find what works for you.

Another minor challenge we had was movement. In the Vive version, pointing to move almost feels natural- Well, in a video game sense anyway, but with the Oculus, it was very difficult to point in the same manner. Ultimately we just made use of the analog stick to move. It’s not perfect and doesn’t feel quite as nice as the Vive, but we’re happy that it works well enough to not hinder the game experience in any way.

We made a few changes that should hopefully make the game feel a bit nicer;

We noticed a few performance hits after a frequent amount of restarts due to some mesh and GFX related leaks. We’ve since patched those holes and can quite happily say that we’ve also reduced the RAM usage of orbYorb overall! (400-500mb+ down to around 250-350mb).

Also we had an internal overhaul of the audio system. Unfortunately you won’t see or hear any difference with this, but I can gladly say that it makes our lives a bit easier in terms of audio implementation. FMod is a beautiful plugin when it comes to Unity, especially in that it’s programmer-centric, however it’s very C++ styled, and while that doesn’t bother us, it can add a bit of code bloat to just trying to play a single audio instance. So we worked on reducing the overall bloat.
Nothing else major, but we’ve updated the SteamVR plugin we use, as well as the Unity version to 2017.3 (which helped fix one of the memory leaks!)

That’s it for this week’s patch. We’ve got a lot going on behind the scenes here already, but if you have any ideas or feedback, please don’t hesitate to let us know! This is the perfect time for us to be swayed, and I look forward to seeing how orbYorb shapes up in the weeks to come!

+20min. on top of the 30min. spitpaint, trying to use the sketch as a base and adding layers over that. 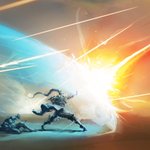 Unknown number of staff made redundant but development is continuing

Also my DMs are always open to folks wanting advice on getting into games or folio feedback! #gamejobs